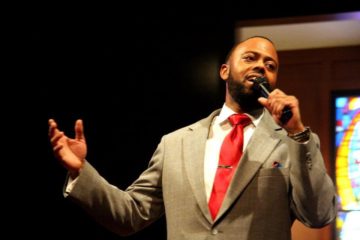 Since first appearing on the legendary gospel television show, “Bobby Jones Gospel” at the age of 10, Calvin has been sharing his spiritual gift of music with the world. Born in PA and raised in North Carolina, Calvin Manley is a product of Christian education, having graduated from Pine Forge Academy and later attending Oakwood University. While at Oakwood, Calvin entered the Alabama Music Hall of Fame as a lead vocalist for the world renowned, Oakwood College Aeolians. In 2002, Calvin released an album as a lead vocalist in the critically acclaimed gospel group, Chapter 5. God blessed their ministry, allowing them to share the stage with artists such as Shirley Caesar, Fred Hammond and Commissioned, and Yolanda Adams, to name a few. After 5 years of touring the country and the world, God still has not finished with Calvin. In 2007, Calvin released a solo album, Spiritual Gifts, Vol. 1. Once again, God carried Calvin’s ministry beyond borders, even giving him a chance to tour worldwide. After a six year hiatus, In the Fall of 2013, Calvin began working on his Holiday single “Joy Bells.” This smooth, upbeat and contemporary track was sure to attract people from all walks of life. Joy Bells was released to the world in the Winter of 2013 to all digital music outlets. Upon its release, major buzz surrounded this high spirited song. Calvin performed it before crowds small and large. Each time it was performed live, the song received outstanding acclaim. It also was a radio favorite among independent radio stations around the country. Shortly after Joy Bells release, the follow up video premiered to this holiday hit. The video also received critical acclaim and became a fan favorite. Calvin is currently getting major buzz as a Praise and worship leader around the Atlanta area. His unique and spirit filed style captures audiences, both young and old. When Calvin leads praise and worship, he brings his own style as a solo artist and mixes it with his love for music, his love for singing, and his love for God. Calvin has a style that is very unique to the Christian music scene. Having been compared to the likes of many, Calvin has developed a style all his own. Calvin’s ability to write, arrange, produce and perform, covered with the “anointing” God has given him, makes for a unique, powerful sound that is rarely heard in music today. Now, with a renewed commitment to ministry, God has positioned Calvin to touch hearts and change lives through music once again.

Request A Quote From Calvin Manley