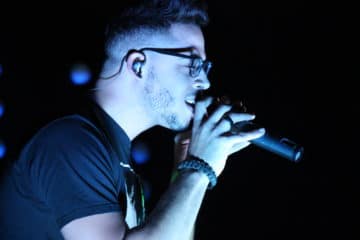 Christofer Scott began his musical journey as a young teenager in the praise band at his church. After some time, he began to write Christian music and lead worship in his church. He entered a local "Fox In the Morning" contest where he vied for the opportunity to have a guaranteed audition for the reality tv show "American Idol". He won the competition and received the guaranteed audition. Some time later, he joined a ministry and traveled the country and abroad singing and dancing. Eventually, he began writing and producing songs and released an album under the artist name "C#" entitled "MEnigma". With what was beginning to be a promising future ahead of him, he auditioned for the reality tv show "The Voice". Much to his surprise, he was one out of 40,000 people to have made it from open casting auditions to Los Angeles, CA. He made it to blind auditions, but the teams filled up before he had the chance to audition. He was a worship leader at a youth and young adult church called The Refuge from 2012-2014. He met his wife in 2014 and currently attend Liberty Church with their 4 children. He and his wife lead worship on the worship team. In 2017, Christofer kicked off what he calls "The Journey". He endeavored to write and release a 5-song EP titled "Dive In". He began a Kickstarter Project in February with a goal to raise $4,000 and exceeded his goal, raising a total of $5,000. This allowed a 5-song EP to become a 7-song EP which he released in August. October of the same year, he was participant in season 4 of the christian singing competition "The Sound". His journey led him to win the competition and includes such prizes as meeting and recording with affluent recording label Centricity Music (Lauren Daigle, Jordan Feliz), releasing a music video, and local radio airplay. For booking, email [email protected] or call at (502) 689-6690. Facebook.com/christoferscottmusic Instagram @ChristoferScott Twitter @ChristoferScott YouTube at cwilk363.

Request A Quote From Christofer Scott