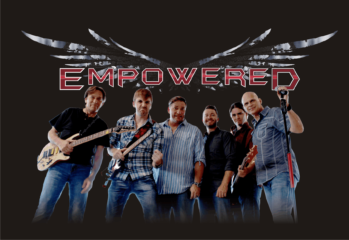 It all began after having played the rock circuit in New Orleans for years in a secular rock band. Years later, in 1995, DiChiara was born again and a member of then, Trinity Christian Center. Therein laid a quandary…what to do with the music that was still burgeoning within? Empowered was originally born in 1998 by DiChiara. After a first recording, changes of band members, and a long hiatus, Empowered has taken its ministry to the next level with the 2012 CD release of “Soul Cry,” recorded in Nashville. Empowered is a Christian rock band that is based out of Baton Rouge, LA, that wants to empower others with His message. After all, Jesus is the Rock! After pulling together new material from the past couple of years, the band got in touch with Jason Wall at Angel on the Wall Music in Nashville, TN. Studio time was booked, and multi-Grammy Award winner for producing, Jim Dineen of Nashville was added to the mix. The disc was mastered by Erik Wolf at Wolf Mastering in Nashville as well. The Soul Cry disc has tracks that range from guitar-driven rock styles to soft ballads that will stir the soul. The band has made a pledge to the Lord to play Christian music in His honor, and to “empower” people with God’s message. If one life is saved for eternity, this band has done its job. The stage is set for music with passion. Let His message be heard!

Request A Quote From Empowered