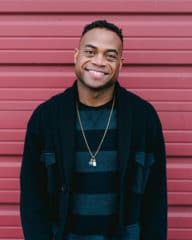 For 17 years Jahmaol grew up in church but didn't have a relationship with God. Though he heard the gospel numerous times, it never took hold over his life until his senior year of high school. Jahmaol grew up in the suburbs of Carrollton, Texas, where he quickly learned to be self-seeking, pursuing every effort to fill the void he had in his heart. After continued failure to find identity in popularity, material wealth, and success, he hit a depression that brought him to a state of brokenness where God would graciously meet him. He sent a youth pastor from Prestonwood Baptist Church into his life to lovingly show him the Scriptures and live them out in a way that modeled Christ well. Halfway through his senior year of high school, the Lord saved him. Through much discipleship from several different godly men and encouragement from Christian Hip Hop music, the Lord showed Himself to Jahmaol in a mighty way that would eventually lead to a call to ministry. Once God saved Jahmaol and revealed to him the emptiness of the life he was pursuing in the world, he quickly became passionate about sharing with the next generation where to find true life, which is only found in Christ. With that, following his first semester of college, the Lord revealed a call to do youth ministry along with the art of Christian Hip Hop. This led him to transfer to Dallas Baptist University in January 2011, where he graduated in May 2015 with a BBA in Music Business. During his youth internship at his church at the time (The Village Church Dallas Northway), God revealed a vision to start a Hip Hop discipleship program called 2 Talented which helps young rappers grow in their craft and in their relationship with Christ. On April 7th, 2015 Jahmaol released his first retail album called Absolutely Relative Vol. 1: Generation Arise. Currently the 25 year old is working on his 2nd album, enjoys discipling young rappers, lives in South Dallas/Fair Park and is a member of an Acts 29 church plant called South Dallas Community Church where he attends and serves.

Services Offered: 1. Rapping 2. Speaking/Preaching/Leading Breakouts 3. Spoken Word 4. Rap/spoken word during worship sets. Honorarium Price & Booking Info: A set 25 minutes or less: $250. A set over 25 minutes: $500. Speaking (in addition to performing): An additional $100 for messages 20 minutes or under. An additional $200 for messages over 20 minutes. Exclusively Speaking: Messages 20 minutes or under: $150. Messages over 20 minutes: $300. Glad to email Full Booking Portfolio at your request.

Request A Quote From Jahmaol Clark