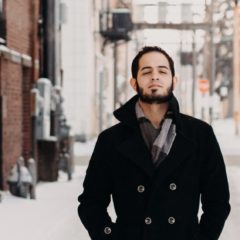 Joseph Madigan stood at a crossroads when he was 19 years old. He could choose to continue his life entrenched in drugs, alcohol and partying, or he could choose to break free. Madigan grew up in Waterbury, Connecticut, and was just five years old when his parents divorced. From there, his mother remarried and then divorced several other men. With each new step-dad came a new wave of abuse, punishment and pain. Madigan endured everything from being locked in a basement to being burned with fire. Through it all, he felt utterly alone. “I was raised in conditions that most people see as unimaginable,” said Madigan. “I thought it was normal.” By the time Madigan was 16 years old, he fled from his home with a single bag of clothes in hand. Homeless, he moved from house to house as various friends offered to host him, and lived a life that was far from stable. His grades in school were less than ideal, he was addicted to drugs and alcohol, and he idolized sex. His friend group consisted of gang members, addicts and thieves. He felt trapped in the life he had known since he was young; yet, he graduated high school at 18 and finally felt a sense of accomplishment. “It was the first thing in my life I had done right,” said Madigan. “That was the beginning of the turn for my life.” At 19, Madigan heard about Hope City, a Christian organization located in Marion, Indiana, that provides housing for at-risk young adults and aids in getting them back on their feet. Without hesitation he made the 770-mile trek to Marion to be involved with Hope City and finally get the help he so desperately craved. It was there that he finally found what he had been looking for: a personal relationship with Jesus Christ. “They taught me how to be a man of character and integrity,” said Madigan. “They helped me develop my faith as well as me as a person.” Through Madigan’s new relationship with Christ, he began to see his life change before his eyes. He broke free from his addiction to drugs, alcohol and sex, and he began to see a fresh vision for his life. “As I grew closer to Him, I grew more in my love for people,” said Madigan. “I wanted to give back to people in my past and inner city cultures. I wanted to invest myself in bringing people to that place where they can experience the freedom and joy that I have in my life now.” That’s when Madigan began writing hip-hop songs. “God just started developing the gift in me,” said Madigan. “And it became bigger than I could have ever imagined.” Madigan founded Kingdom Motives in April 2014 with the vision to produce hip-hop songs with a Christian message that would break through secular radio stations to reach people in inner cities across the nation. “No one showed me who God was [when I was younger],” said Madigan. “I was limited to secular music and what the world was saying about love and sex, and I never had a voice. I feel like I can be that voice for kids who are in that same place I was in.” As a sophomore studying Human Communication at Indiana Wesleyan University, Madigan has had the opportunity to work with IWU’s Division of Business to develop his ministry. Through the partnership, he was able to develop a copyrighted logo and a detailed business plan. “That helped push me,” said Madigan. “It’s going to be a global movement. We want our motives to be pure and we want them to be for the kingdom of God.” Madigan is in the midst of independently producing and recording his first-ever album, which will be released on May 26, 2017. As for the future of Kingdom Motives, Madigan hopes to eventually make it a non-profit organization where he can continue to use his past and his talents to spread the freedom that comes from a life in Christ. “I know I will always make music because it’s my worship,” said Madigan. “Let’s wake up, let’s live for the kingdom, let’s focus on eternal perspectives and go all the way for Him. That’s really the message of Kingdom Motives.” Written by: ASHLEY WITKOWSKI COMMUNICATION SPECIALIST INDIANA WESLEYAN UNIVERSITY 4201 SOUTH WASHINGTON STREET MARION, INDIANA 46953-4974 Date written: February 24, 2017