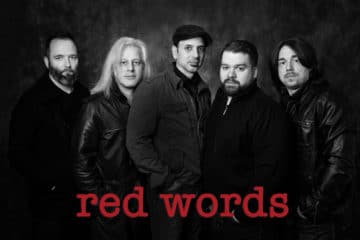 In the summer of 2012, founding members, Paul Ammendola (lead vocals, keys) and Mark Phillips (lead guitar, vocals), teamed up with close friends, Michael Perrone (guitar, vocals) and John Foote (drums, percussion) to provide music for a ministry event. As they delivered their eclectic blend of soul-baring vocals, crunching rock-n-roll guitars, and tasteful grooves, the audience quickly realized that they had experienced something very special. After a number of other well-received events, Jaime Moore (bass guitar) was added to finalize the line-up. With the band fully formed, their repertoire quickly grew, as did their popularity. Now -- with an ever-growing fan base -- Red Words aims to further expand their audience. Red Words released their highly anticipated self-titled CD in October 2014, exemplifying their original sound (an effective hybrid of edgy rock, R&B, pop, gospel and soul). This rock band, however, also has a message and it’s one the world desperately needs to hear: God Loves You (no matter where you are or what you’ve done). It’s easy to get discouraged in today’s world of stress and social clutter. It’s easy to lose hope. “Our music is about finding joy and hope in a dark world,” says Ammendola. The “red words” that Jesus spoke are not only to be read, but are meant to be lived out. Music is powerful. It can stir souls, change hearts, and restore lives. With an aim to do just that, it’s time now to throw the doors wide open for Red Words, let love loose… and turn up the volume!

Request A Quote From Red Words