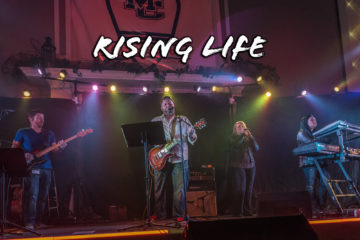 Rising Life's story is as powerful as their music. Especially when you discover that the two core members were born on opposites sides of the earth. Singer/Songwriter Heath Glisson was raised in a tiny farming community in far western Kentucky called Gage. His wife Kristy was born in Seoul, Korea. God lead them together in 2002 and they were married in 2003. Heath had always been involved in music and in 2011 gave his life to the ministry of spreading the good news of Jesus Christ through music. He started writing music and formed Rising Life in early 2012 and Kristy joined shortly after that on keyboards. In that time they have released 3 studio albums, are about to release a live record and are working on their fourth studio album. Their song "My Sunny Day" debuted at #2 on the Christian Radio Charts and the album "The Lion" received critical acclaim. They have opened for industry giants such as Jeremy Camp and Jason Crabb. However Rising Life is quick to tell you that none of those worldly accolades matter and that only salvation in Jesus Christ has any eternal value.

Request A Quote From Rising Life