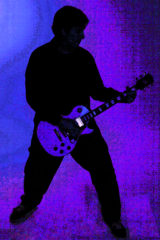 Shayne John LaMont, originally from Lake Villa, Illinois, moved out to San Diego California when he was 5. Growing up in Mission Valley, he attended two Catholic grade schools, St. Theresa Academy and Nazareth Elementary and graduated from St. Augustine High School in North Park. He then moved up to Long Beach to attend California State University Long Beach where he earned a Bachelor's in Science and a Masters in Public Administration. He began learning how to play the guitar in grade school at the age of 13, started writing and recording original songs at the age of 16. Shayne recorded his first CD in 1999 called Forget Reality that he mostly gave away to family and friends. In 2000, he joined a local Orange County band called Sinfected that later became West Nile, releasing a CD in 2003 and playing local venues in Orange County including the Galaxie Theatre and the Coach House. In 2004, Shayne renewed his commitment as a Christian and left West Nile in order to pursue service to the Christian church. Shayne began serving at First Baptist of Yorba Linda in 2005 and has worked with other Christians in the release of a self-titled CD called Broken 31, in which they sold several hundred copies, performing at numerous Christian and secular venues in 2006 and 2007. Shayne then released a single called Charge that was written as a theme song for the San Diego Chargers, who just moved to Los Angeles in 2017. Charge has been remastered and re-released under the Broken 31 name in 2017 and is available at most online music stores. Shayne is releasing a new CD in December 2017 titled Faith: Just Be Still that is an eclectic collection of original songs with influences of blues, rock, jazz and country music with a wide range of emotion and topics that come straight from the heart.

Call me directly. I can perform solo acoustic sets of original and popular praise songs or provide a full contemporary band to play original blues, rock, praise and worship songs, and include modern versions of traditional hymns.