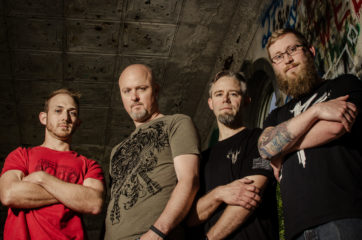 About Written in Red

Based out of Gillette, WY, Written in Red is a five piece, music playing and God loving group of guys. The band is a fresh sounding christian rock band with a touch of metal and southern influences. Written in Red puts on a fun and energetic show while sharing a great message in their songs and with their lives. This band has shared the stage with names such as Disciple, Thousand Foot Krutch, We As Human, Righteous Vendetta, and many more. They were awarded a spot on the Rapid Fire Stage at the 2014 Hills Alive event. The band is currently working on releasing its first full-length album entitled Not My Home. Not My Home was recorded at Black Earth Sounds in Gillette, WY and Mixed and Mastered by JakeJonesProductions (We As Human). The band was recently described as one of the most passionate bands to proclaim the name of Jesus Christ. It is Written in Red's goal to present the gospel; that we are all sinners and that God sent his son Jesus to die on the cross and take the punishment we deserve.

Reviews for Written in Red

Request A Quote From Written in Red